Who's ready to party?!

If you're looking for the best waterfront restaurant at the Lake of the Ozarks, look no further than Paradise Tropical Restaurant! We're famous for bringing you some of the best live entertainment on the west side of the Lake of the Ozarks, and we already have our full band schedule lined up for this year! Here's a complete list of all of the bands that will be hanging out with us this summer.

MAY
Who's excited for the best live music at the Lake of the Ozarks? We're going to be starting our season off right with some of the best entertainers around:

Some of these bands will even be here for repeat performances!

JUNE
June's entertainment schedule is going to feature some of the same artists as May, but with a some other additions to the party:
Some of these bands will be here for repeat performances as well. Be sure to check out the Paradise Restaurant band schedule to see their exact performance dates!

JULY
July is peak season at the Lake of the Ozarks, and our band schedule is certainly going to reflect that! This month, you'll see several of the great artists at Paradise you did in the last two months, but you'll also see:
Tuesday, July 14th is also the date for our famous Christmas in July party, so mark your calendars now! Put on your favorite summertime Christmas outfit and join Paradise Restaurant & Bar for the best party of the season.
AUGUST
We love all the bands coming to Paradise in the early summer months so much that we're bringing a lot of them back for the month of August! We're also going to be adding a few more bands to the mix, though, including:
Just because we're only adding three new bands to the mix does NOT mean we're skimping on entertainment in August! We'll still have live music every Tuesday-Sunday night, courtesy of all your favorite bands at the Lake of the Ozarks.

SEPTEMBER
Join us in September for more great performances by all the awesome bands you've been hanging out with at Paradise all summer long! We're going to be featuring a broad range of artists that will perform everything from country to reggae to blues to rock. No matter what your favorite style of music is, you're sure to love the bands at Paradise!

See You Soon At Paradise!
The Lake of the Ozarks' favorite waterfront restaurant opens for the 2015 season on Friday, April 3rd. Who's ready to kick off another great season at the Lake? We'll see you there!!

Come out to the BEST Waterfront Restaurant at Lake of the Ozarks where EVERY day is another day in Paradise!!

Who's excited for Paradise Tropical Restaurant's opening day for summer 2015?? WE ARE - and we hope you are too! It's going to be another amazing summer at the best lakefront restaurant at the Lake of the Ozarks.

Can you pick your top 3 reasons you're looking forward to hanging out with us again this summer? Here are ours! 1. Totally Awesome Live Music
There's something uniquely perfect about kicking back with your favorite drinks while listening to the best live music at the Lake of the Ozarks! We have the complete band schedule already laid out for this summer, featuring local bands and artists Squiggle Fish, Boom Chucks, Nass T Habit, The Surge, Donny Larson, and so much more! View the full band schedule on our website: www.paradisetropicalrestaurant.com/live-music-lake-ozarks.asp.

2. Unbelievably Amazing Food
There's a reason we're known as the best place to eat at the Lake of the Ozarks! Paradise Tropical Restaurant offers a huge menu with tons of selections, so you're sure to find something you love no matter what you're craving. We also offer a tantalizing dessert menu that will perfectly finish off any meal - or serve as a meal all on its own! Chocolate Nachos, anyone??

3. Perfectly Wonderful Sundays
As the last day of every weekend, we decided that Sundays deserve something special. Last year, we celebrated every Sunday with our famous Backyard BBQ at Paradise Tropical Restaurant. We're planning something equally awesome for this summer! Keep watching our website for updates: www.paradisetropicalrestaurant.com. 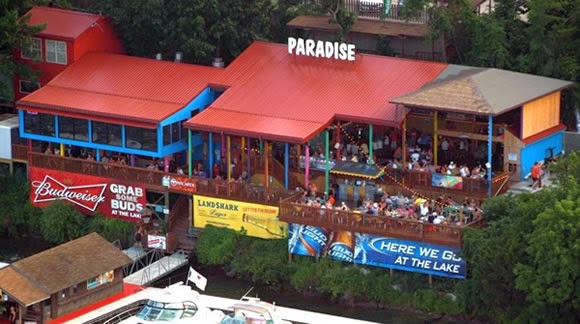 WHO'S EXCITED?
We can't wait to celebrate another outstanding summer at the Lake of the Ozarks with you all! What are you most excited for this season? We'd love to hear what you're looking forward to!

Come out to the BEST Waterfront Restaurant at Lake of the Ozarks where EVERY day is another day in Paradise!!